It was Chuck Lee, Dan Wallace and Erv Walrapenstein who were instrumental in placing an ad in the local paper seeking "religious liberals to form a Unitarian Fellowship".  Dan and Erv may have been involved with PUC, and Chuck and Francie Block attended a few services there.  But they missed the camaraderie of the Solana Beach fellowship so much that Francie Block is sure that is why Chuck was instrumental in getting together with Dan and Erv.

We first met in a home - Francie thinks it was the Wahlrapensteins - and we met Sunday evenings.  We were soon joined by the Schwartz's, the Welners, and the Snodeys.  Francie does not remember a meeting place between the home and the nursery school, but we were meeting at the nursery school on Rowell on Sundays in 1968 and maybe as early as 1967.  From the original charter members, only the Ellenbergers, the Gales, the Lees, and the Martins remained active.  We did have a children's program then, and Beverly Martin and Francie Block played guitar with the children and Ken Ellenberger introduced them to "Big Ball".  See below for a picture from a meeting there in 1968. 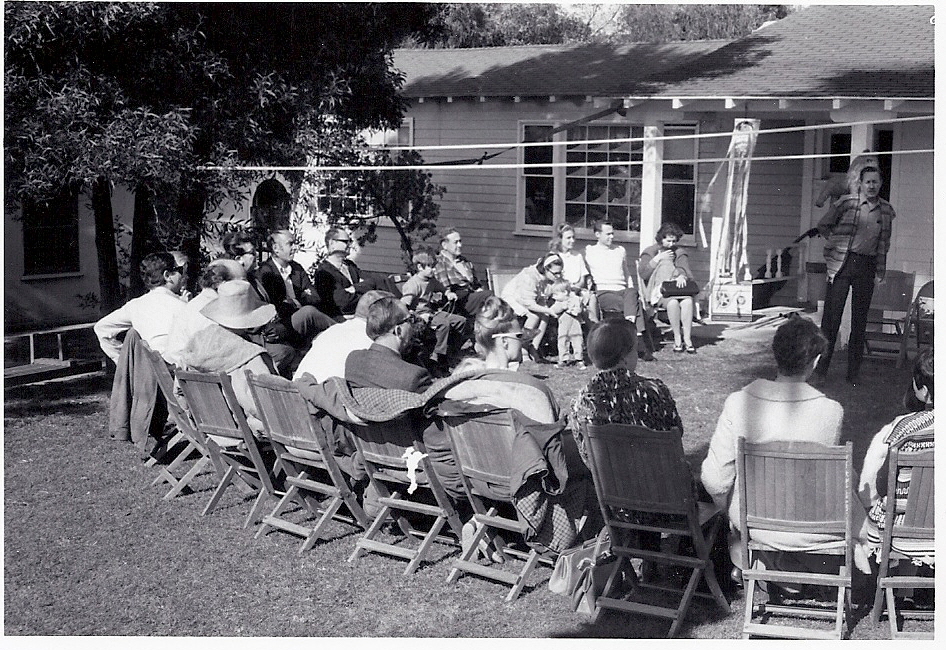 When the nursery school closed, SBUF moved.  We met in the Manhattan Beach Property Owner's Association facility on Rosecrans Avenue (that's where Bob and Francie Block were married), and we also met in a community building in Polywog Park (also in Manhattan Beach).  From there we found Mathews Cottage in Redondo Beach where the Fellowship now meets.

To return to the home page, please click here.